With many outstanding advantages, 5 a side football is gradually becoming a popular sport that anyone can participate in. A classic football match requires at least 22 people to participate in the competition. Thus was created 5-a-side football, commonly known as mini football.

What Is 5 A Side Football Tournament?

As the name suggests, the 5 A Side Football Tournament is a sport where each team only needs 5 members, including 1 goalkeeper and 4 players. You can play against opponents on a small field almost anywhere. Matches are shorter, more intense, and easier to conduct.

The 5 a side football rules are pretty similar to traditional football. It is easier to organize because it does not require many members and a large football field. However, both the attractiveness and the health benefits you receive are preserved.

Any age group can form a team of 5 to compete against each other. Students can form teams and face off against other classes. Or middle-aged people often choose this game to compete. That is also the most significant reason this football is becoming increasingly popular.

The Typical Of Format Of 5-A-Side Tournaments

In the UK, the biggest 5-a-side tournaments follow the World Cup format. With a group stage where each team plays each other once, and then the knockouts stage. This makes sure that every team that plays gets at least 4 games.

Most group stages are played in the morning so that there is time for lunch. Most often, this is for an hour. After lunch, the afternoon is made up of knockout rounds and finals.

On Saturday, July 2, the football tournament will take place. For a round-robin tournament, teams will be put into groups. In the final round, the best teams from each group will play against the best teams from other groups. Each game will be 30 minutes long (15 minutes per half with a 5-minute break).

Each team has at least 5 players and no more than 8 players. During the game, one player comes on, and the next one leaves.

Teams don’t always get football kits at all events. Please talk to the tournament organizers before the game.

What are the 5 a side football rules? 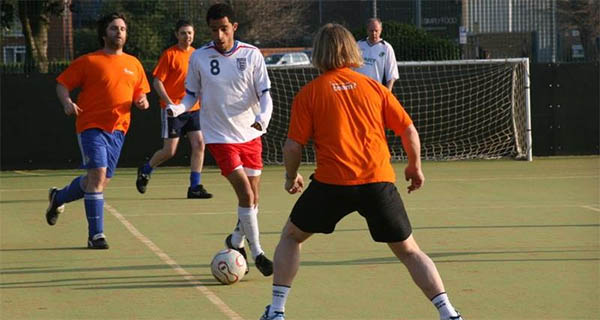 It’s important to know that some 5 a side football rules may be different between leagues or divisions. But the rules aren’t hard to understand. The referee will flip a coin to decide which team goes first, but you can always talk it over with your team.

Goalies can only roll the ball out or pass it along the ground. There are no out-of-bounds lines when the ball is in play. This means that the 5-a-side football game will keep going without stopping. Pass backs are allowed, but it could be seen as wasting time if a player passes the ball back to the keeper after the keeper just passed it. The other team might get the ball and have a free kick from the edge if this happens. Only the goalkeeper is allowed to touch the ball inside the half-circle penalty area. The goalkeeper can’t leave their own area; if they do, the other team could get a penalty kick. A penalty kick must be taken from the middle of the field, and the player can only take one step before kicking the ball. The goalkeeper can only kick the ball when they are trying to save it. The keeper should always throw the ball underarm.

No one from the outfield can go into either area. If a player from the attacking team goes into the other team’s area, the game stops and starts over with the keeper. The shooting has to begin and end outside the area. Those who are defending shouldn’t go into their own area to get an edge. If this happens again, the other team will be given a penalty kick.

More: which is the oldest football tournament in India?

5-a-side football is a great way to get some exercise, make new friends, and play a casual game of soccer without too many rules. If you want to play more seriously, you can join a team or a more professional league. But if you just want to play with your friends, 5 on one side is a great way to improve your football skills and enjoy a new way to play.