The Carlisle Grounds, one of the oldest football stadium locations in Ireland, still has a lot of personality despite losing both of its historic barrel-roofed stands in the past ten years. Let’s learn more about this football stadium in this article!

General information about the Carlisle Grounds 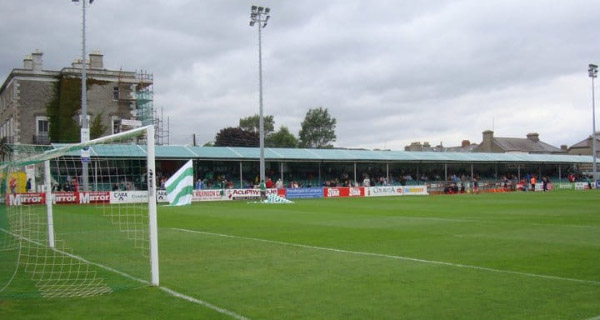 In Bray, County Wicklow, Ireland, there is a football stadium called The Carlisle Grounds. It is the home of Bray Wanderers A.F.C., which is located just behind the Bray D.A.R.T. station.

You can look at the map to find the location of this stadium:

It was admitted to the League in 1985, and Carlisle Grounds is where it holds its home games. The Seagulls is the club’s moniker, and its colors are green and white. 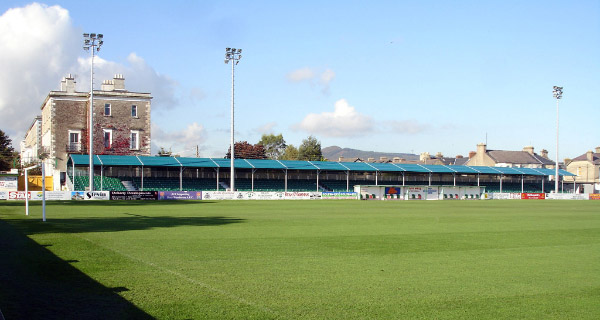 The Carlisle Grounds is one of the biggest stadiums in Ireland. Bray Daly Railway Station essentially serves as access to the turnstiles alongside the Quinsborough Road Level Crossing.

As we turn into the stadium from this corner, we can see the Quinsborough Road End, which hasn’t changed much throughout the years, directly to our left. It’s possible that this tiny walkway, which has a gently sloping grass bank and is surrounded by shrubbery and a few large trees, is one of Ireland’s most scenic behind goal terraces.

On the opposite side of the street, a tidy row of Edwardian homes looks over the penalty area. Looking to the right from the Quinsborough Road End, we can see the Railway Side, which once had a barrel roofed cover that nearly covered the entire pitch.

This was constructed as a backdrop for the movie, Michael Collins. It was then taken out, leaving the concrete base we see today, which has 12 concrete steps and provides a great vantage point for the pitch.

Oddly, there were previously 12 rows of red plastic chairs built on the concrete deck, but these have since been replaced by 5 or 6 rows of seating, providing about 2,200 seats with rows 7 through 12 being essentially empty.

From the Quinsborough Road End, straight across the field, we can see the Training Ground End, which is essentially a grassed 5-a-side field that backs into the parking lot next to Seapoint Road.

If you want to stand behind the goal, there is a small, flat area in front of the practice field, and the view of Bray Head and the County Wicklow mountain range provides a rather magnificent backdrop. In 2006, a green and white painted barrel roofed standing cover that was dismantled was replaced by the current temporary sitting stand on the Seymour Road side.

Although many older supporters will undoubtedly claim that the new stand doesn’t have the same charm as the one it replaces, the seven rows of green plastic seats provide seating for 985 people, and the green canvas roof matches the club’s colors. On the training field end, a modest hospitality area flanks the stand. 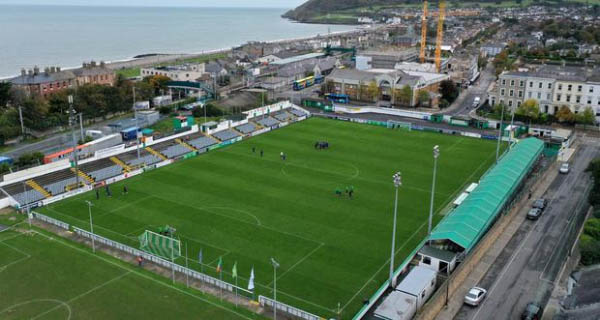 From South Dublin, go north on the N11/M11. Just north of Bray, exit the M11, and then turn right onto the R119 Dublin Road at the junction. Follow the route towards the town center after crossing the river bridge, then turn left onto Quinsborough Road. The Carlisle Grounds will be on your left as you approach the level crossing; turn left into Seymour Road to access the main entrance.

From Wicklow, take the N11 north. South of Bray, take the exit, and at the roundabout, turn right onto the R768 to cross over the N11. Turn left onto the R767 Killarney Road at the following roundabout.

As it passes through the heart of the town, keep to this road. Turn right onto Quinsborough Road once you’ve reached the town center. The Carlisle Grounds will be on your left as you approach the level crossing; turn left into Seymour Road to access the main entrance.

Carlisle Gardens is merely a five-minute stroll from Bray (Daly) Railway Station. Turn right as you exit the station and then make a left turn onto Quinsborough Road. On the right, up on the ground.

Every 10 minutes, Bus No. 145 provides service to Kilmacanogue. It leaves at Dublin Heuston and travels down the River Liffey’s north bank through Dublin City Center before continuing on to Bray and Kilmacanogue. You must exit at Main Street Bary (near McDonald’s at the Town Hall intersection), then search for the signs pointing to the beachfront and railroad station.

The office across from the bowling alley is where tickets can be purchased.

Above is some information about the Carlisle Grounds. We hope that through this article, you have gained a better understanding of this stadium and already know how to get there. Thanks for reading this article!